Didn't work on it last night due to headache, but Sunday I got a little more done. 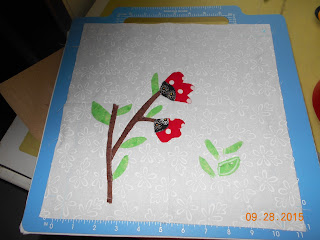 Here is the beginning of My Whimsical Garden by Becky Goldsmith and Linda Jenkins. 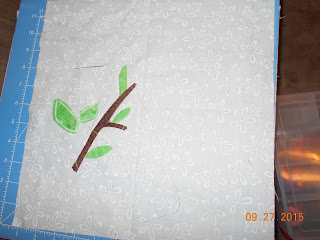 Hop on over to Kathy's Quilt's to see other slow stitching Sunday pictures.
Posted by cajunquilter at 9:00 AM 3 comments:

Where have I been?

The quilt I am working on right now is a surprise so no pictures right now.

I have been however doing alot of crochet and tunisian crochet. 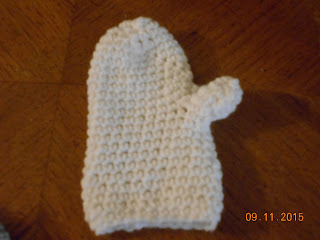 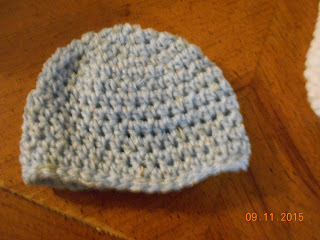 I did do a quick baby quilt 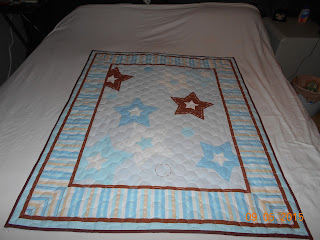 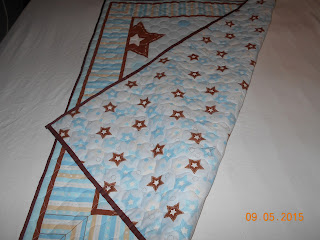 Hopefully I am back to posting regularly now.

Posted by cajunquilter at 7:39 AM No comments: 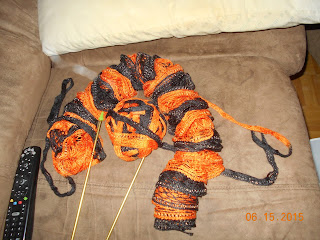 Ran to grocery before the rain hits again. Sounds like we will get a little of the hurricane brewing in the gulf. Hopefully not much rain will come our way since we still having standing water in the backyard.

Off to figure out what I am gonna do for grandson's quilt.
Posted by cajunquilter at 8:35 AM No comments:

These are the 2 projects I am working on today. A knitted scarf, and a wallhanging I am hand quilting. 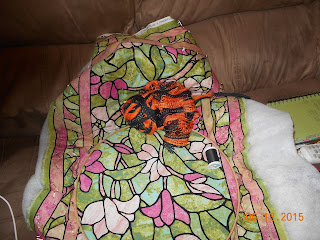 Drop by Kathy's Quilts to see what others are working on today.
Posted by cajunquilter at 11:09 AM 12 comments: 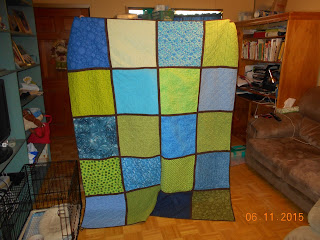 And I put binding on this adorable baby quilt. 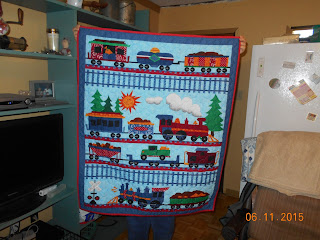 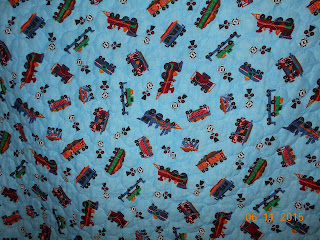 I am quilting the last block in Scott's quilt! Should finish the quilt this week. So excited! 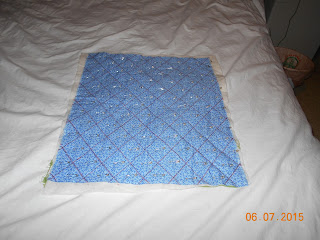 Row 4 is ready to attach to the other 3 rows. Will do that today as my slow stitching Sunday. Go to Kathy's Quilts to see what other slow stitching is happening today. One more row to go on Scott's quilt! 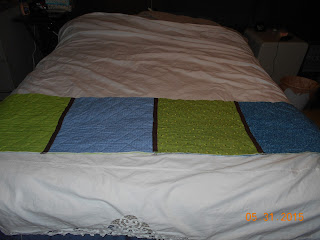 First of all, hubby saw the doctor (shoulder) that ordered the MRI on his back. He has to see a spine doctor. Waiting for WC to approve the visits. Doc wants him to see one that is surgical and one that isn't.

This is row 4 of Scott's quilt. Have one more block to quilt and add to this row and then 4 more blocks for row 5, bind and label and it will be done! 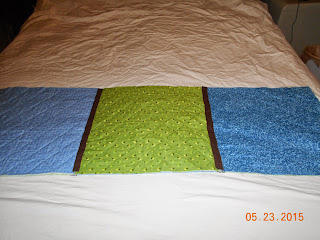 Off to finish getting the house and yard ready for our youngest grandson's second birthday party!

Waiting for the ac repairman. Our ac went out last night. He called a little while ago and said he'll be here in about 45 minutes. Can't be soon enough. It is HOT. Doing nothing all day to try and stay cool. To hot to move around and to hot to sit under a quilt to hand quilt. Oh well tonight I will quilt a little (maybe?) and there is always tomorrow.
Posted by cajunquilter at 2:15 PM No comments:

My Garden and a little quilting 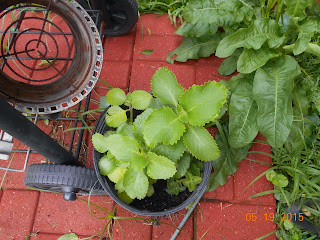 This top is a cumin plant a vietnamese friend gave us. 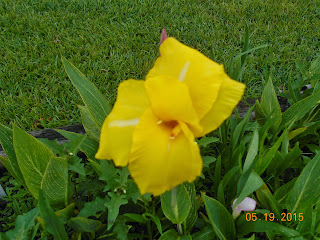 One of our lillies 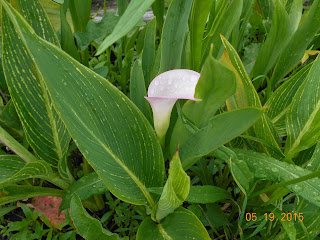 One of my favorite lillies 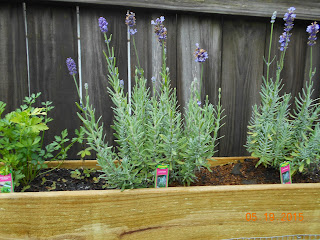 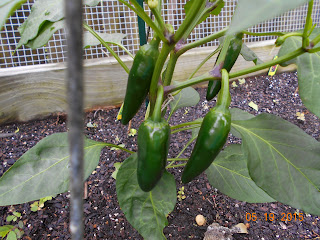 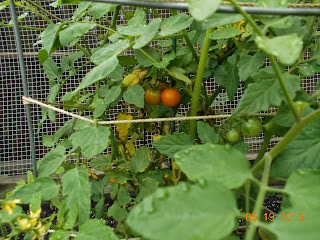 one of the tomato plants we have a few different varieties 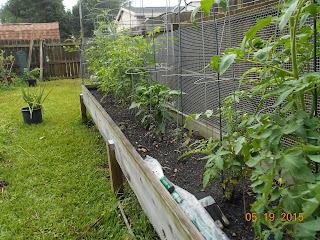 picture of our above ground box - well one of them 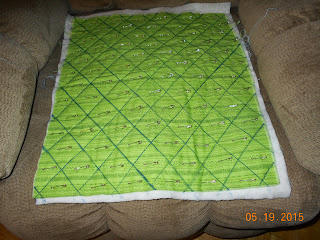 This is what I got done yesterday as we spent the morning at imaging center for hubby's mri and afternoon at brace place getting him fit for a foot brace. We get the mri results Thursday morning - would appreciate prayers, and the brace should be ready in a week.

Posted by cajunquilter at 7:01 AM No comments:

Over Half Way! And our new puppy! 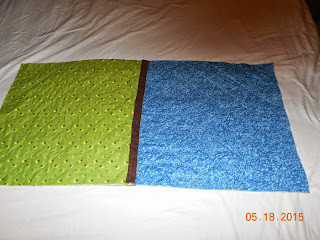 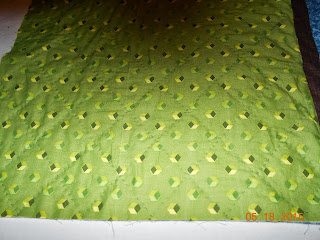 The top picture is the next row, which will be row 4 of 5. The second is a closer picture to show the quilting. Doesn't show up real well. I am hand quilting a 2" diagonal grid in both directions.

The day before Valentines day my hubby bought me an 8 week old yorkie poo. She is completely black and her name is Ebbie. Our last dog died two years ago at the age of 14. It took this long before either of us were ready to have a puppy again. We have 2 cats that are 4 and 5 years old. It's hard to lose a pet that you have had for so long but we sure did miss our dogs. Here is a picture of our sweet little girl. 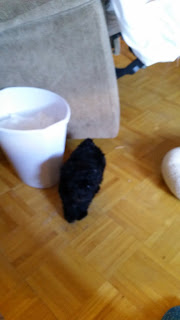 Posted by cajunquilter at 5:37 AM 4 comments:

Here is the update on Scott's quilt. I am over half way done now! 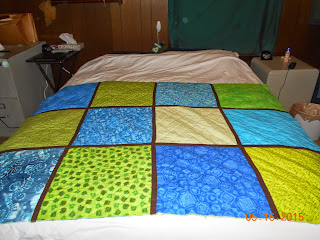 We've been working in the yard getting the garden and flowers done. Will post pictures tomorrow with a couple of before and after. We are far from finished. Hubby usually does all the yard work, but since the accident he needs help and I am doing what I can with bum shoulders. Oldest grandson is coming today to cut the grass. With all the rain we have been getting we need it.

Here is a link to other slow stitching sunday pages. http://kathysquilts.blogspot.com/

Posted by cajunquilter at 9:09 AM 8 comments:

Slow Stitching Sunday - And what's been going on

When I started to do this post I realized that the last one was right before hubby's accident. First of all here is a link to some other slow stitching sunday posts.
slow stitching.

Here is a picture of what I have been working on. 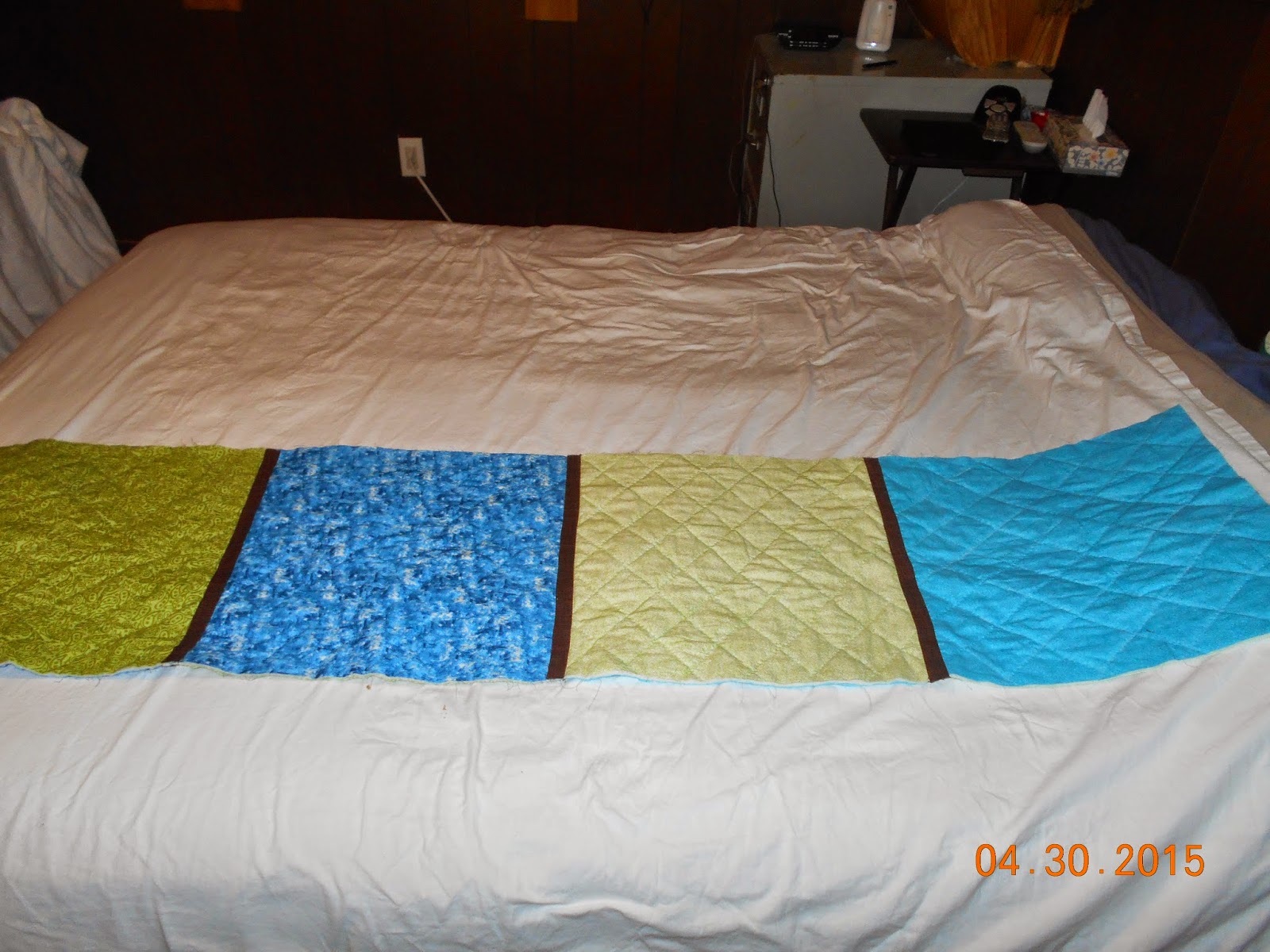 I am doing this quilt as you go. I now have 2 rows joined together, but just realized I hadn't taken a picture of that yet. Will do next time.

This was to be a surprise but with everything going on it was easier to show our son-in-law so that I could work on it when they were here helping around the yard.

So what's been keeping me busy? On November 13, 2014 my husband of 40 years fell 6 foot from the crane at work and landed on a cement slab. He fractured his right side pelvis in 3 places. There are only 4 doctors in our state that do the surgery he needed so we were taken by ambulance to Baton Rouge to the best trauma surgeon in the state. On the 14th he had surgery to repair those fractures. He now has 2 plates and 9 screws. We found out 2 months later that he tore his right rotator cuff to the point it is not repairable. They actually tried to repair it but it was much worse than they were expecting. Eventually he will need a reverse shoulder replacement. He has been in therapy since the accident (the first 3 weeks he was in a pt hospital, the next 2 months he was in at home therapy, and the rest of the time until last week he was in out patient therapy). He returns to the surgeon next Thursday and they will determine if he can be discharged until he is ready to have the shoulder surgery, or if he needs more therapy. He is VERY lucky to be alive. He could have died every time they moved him after the accident till the repair was done. They moved him 8 times. He is back at work since the last week of February on limited duty. He will always have a limp, and a certain amount of disability. Eventually when the pain or lack of movement affects him he will have to have the shoulder replacement. The doctor agrees to wait as long as possible so that he won't have to have another one later on. He is 5 years from retirement right now. He is hoping to make it till closer to that time before the surgery. I return to work soon it looks like at least for a short period of time, hopefully 6 months? As you can imagine this has been very stressful. He lost alot of blood and needed transfusions and has to continue to take iron pills for a while longer. But considering all he has been through, they are amazed at the attitude he has had through all of this and the improvement he has made. The doctors have said he wouldn't have recovered as much as he has without the "I will try" attitude. Anytime they have asked if he could do something his answer has been I will try.  I am very proud of him. He has stayed with a positive attitude through the pain and changes it has made in his life.

So please keep good thoughts, prayers coming our way. And now back to the regular scheduled quilting.

Posted by cajunquilter at 4:20 PM 8 comments: